In Reinforcement learning, most of the training time is spent in collecting experience from your environments(real life robots, simulators), and very little time is spent on the actual learning part on the GPU. So if we want fast RL training, we need to build fast environments.

Due to its ubiquitous usage in RL and easy-to-use API, I’ll be sticking to using OpenAI Gym.

Before going off and using multiprocessing to optimize the performance, let’s benchmark a single Gym environment.

There’s a couple of ways to find the time taken for execution, but I’ll be using Python’s timeit package.

First, I’ll be checking how long it takes to reset an environment before the start of each new episode.

I took an average of 1000 runs, and it’s around 0.0092775 seconds per reset. Next I’ll test to see the time taken to take a random action in the environment using step

I took an average of 1000 runs, and it’s around 0.00056156 seconds per action. In frames per seconds, that’s around 1.78 million new observations every second. That’s pretty fast. Faster than any GPU you can use to train the RL algorithm.

(Note: I’ve reported numbers for only Breakout-v0, but it shouldn’t be too different for other Atari games)

Now, in RL, we don’t just train on data from a single instance of the simulator, even if the simulator is sufficiently fast enough.

Let’s see how to get multiple instances of the same environment up and running.

This isn’t perfect either, because I haven’t created action_space and observation_space fields that other Gym environments have. But the above MultiEnv should be good enough for timing the performance.

Let’s create an instance of this class, which encapsulates 10 Breakout-v0 Gym environments.

Let’s measure the time taken for reset and step like before. I took an average of 1000 runs like before.

It takes 0.102515 seconds per reset, and 0.0061777 seconds per step. As you can see that’s around 10x the time taken by a single environment, and a little bit more time for iterating through env in self.envs, but it’s negligible.

To see how this option scales with the number of environment look at the plot below. 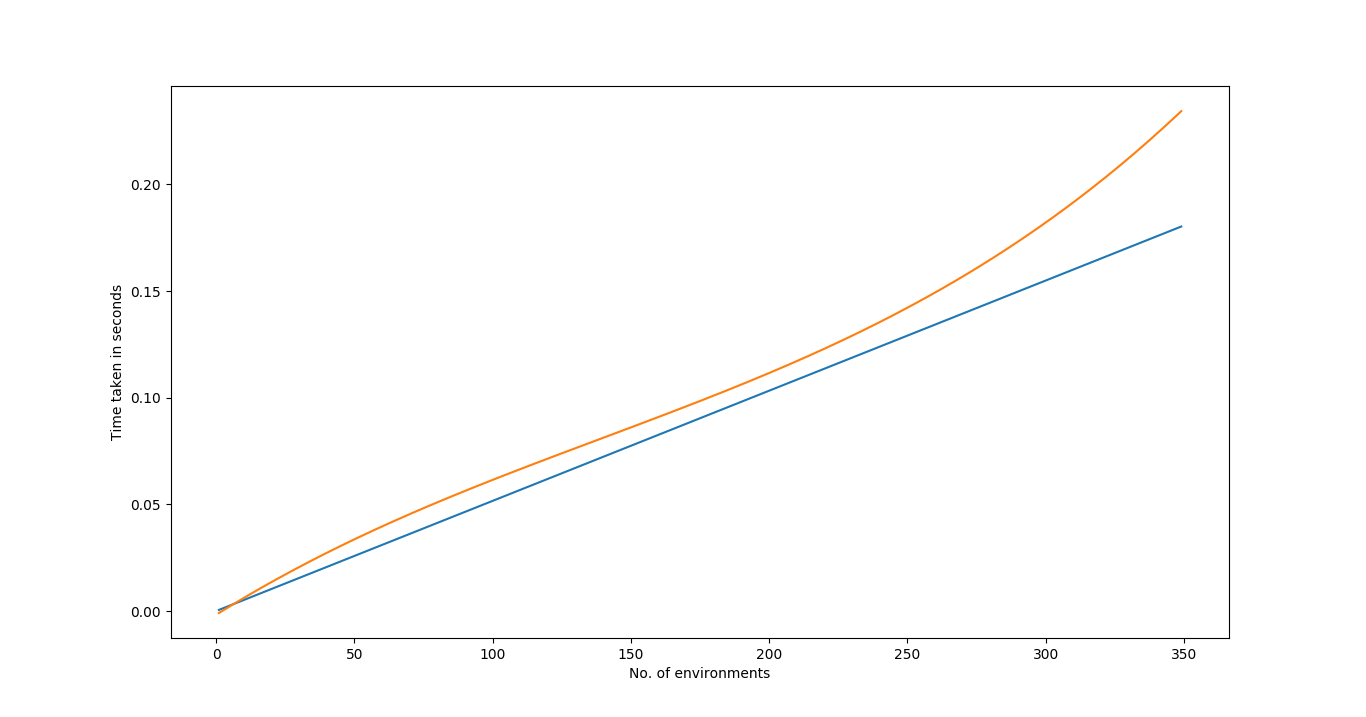 As the number of environments increases, so does the time taken. The blue line is the expected linear growth, what we expect to hit. However, due to added time taken by iterating over all the environments, we get the orange line.

It’s pretty evident why our current MultiEnv takes slightly more than linear time. The execution of any operation such as step or reset is sequential.

This would be suitable where the number of environments is fairly less, or when each environment is very light, like CartPole or Pendulum. But we often deal with cases where we simultaneously train on a large number of simulators, or the simulators tend to be computationally heavy like Gazebo or AirSim.

Our task now is to build a multi-environment system that gets below the blue linear line. We’ll acheive this by using a parallel concurrent system as opposed to this sequential system.

There’s a few ways to acheive concurrent behaviour in Python:

We can immediately disregard one of the above options – Multithreading. This is because of Python’s GIL.

Global interpreter lock (GIL) is a mutex used by CPython, that allows a process to use only one thread at a time. This prevents us from taking advantage of multicore processors. Here is an excellent article about Python’s GIL and how exactly it works.

This is a wrapper class that can be used to treat multiple Gym environments through a single object.

A few things I’ve used above haven’t been defined yet like worker and CloudpickleWrapper, let’s do that now

Now we need to define the target that each Process will use. A worker can be thought as the behaviour of each Process.

Let’s finish our implementation of SubprocVecEnv be defining the basic Gym environment functions.

Let’s plot the time taken for step by a single Gym environment as compared to our multiprocessor Gym wrapper. 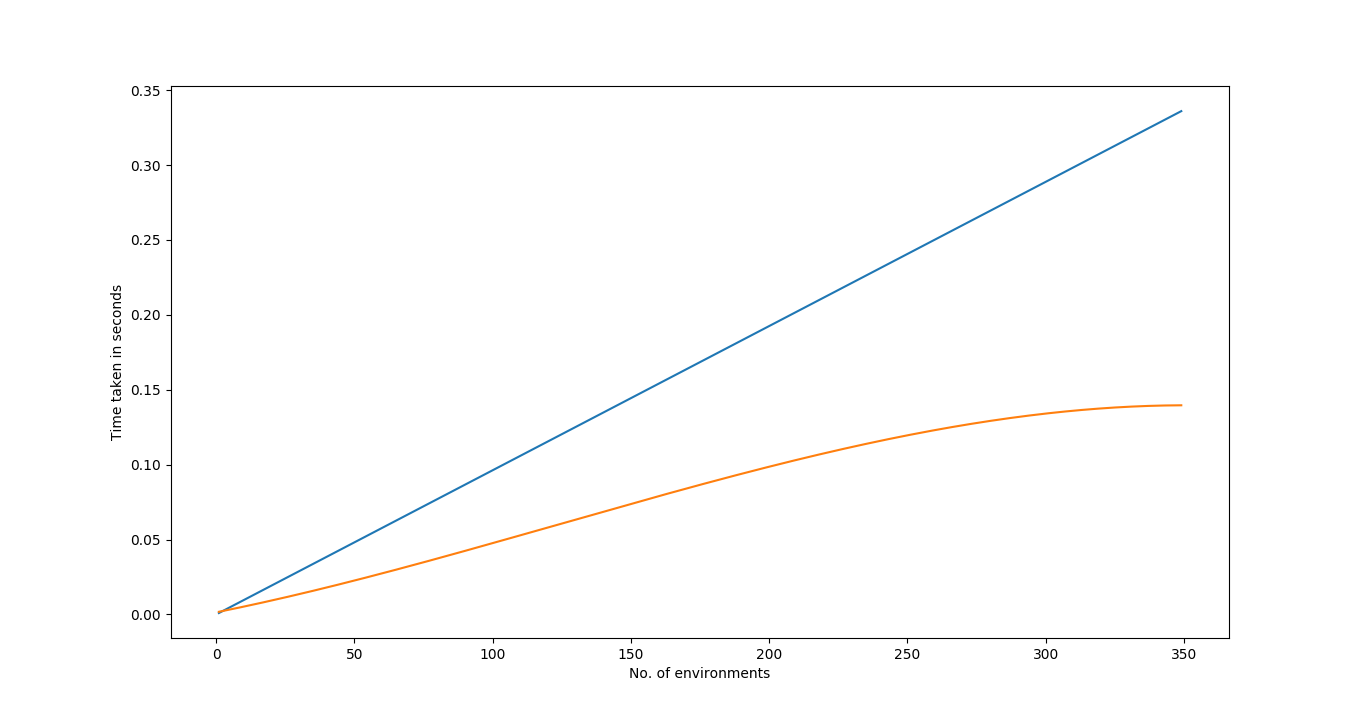 (Note: The single Gym environment here appears to be slower than before since the two experiments were run on different computer, I’ll make a proper definite benchmark at a later time. Sorry!)

In the above method, we send a step command to each of our processes along with the action, but we don’t wait for a response, and we set waiting = True

In the step_wait method, we now need to synchronize every process, collect all the responses and return it. The problem is that the sync step is expensive. Since the speed of all the other processes is bogged down by the slowest process. As an extreme example, consider 10 processes where the first 9 execute a step on its own Gym instance in 1 second, and the 10th process takes 100 seconds to complete the same action.

In this line results = [remote.recv() for remote in self.remote], we need to wait for remote.recv() of the 10th process for 100 seconds, even though all the previous processes were much faster.

Although in reality, the time taken by each process is comparable, we stil need to wait for the slowest process each time. This synchronization step causes the increase in time with increase in environment.

Implementing this would be super easy in my code. Just modify make_env function in make_mp_envs. Instead of env = gym.make(env_id) use env = MultiEnv(env_id, num_seq). Each observation and action will now be a matrix of size [num_proc, num_seq] which you can flatten out and treat as a vector.

Using multiprocessing for parallel gym environments was a definite improvement, however it’s useful only for a single PC with multiple cores. For large scale training using clusters of PCs, we’ll need to look a little further.

Python’s multiprocessing can spawn multi processes but they will still be bound with a single node.

What we will need is a framework that handles spawning of processes across multiple nodes and provides a mechanism for communication between the processors. Pretty much what MPI does.

MPI is not the only tool that can be used for this. Other popular choices are pp, jug, pyro and celery although I can’t vouch for any since I have no experience with any of them.