So I went ahead and implemented a couple of popular actor-critic methods like DDPG, A3C and the more recent PPO, and soon turned my attention to TRPO.

The difficulty with TRPO is that it uses natural gradients, as opposed to regular gradients.

Before reading this post, it is advised that you’re comfortable with vector calculus and gradient descent.

Normally we assume the parameter space \(S\) to be Euclidean with an orthonormal coordinate system. So that’s the normal 3D space we’re familiar with. Using regular gradients here would be ideal.

However, when \(S\) is a curved manifold, there is no orthonormal coordinate system. This is particularly when we’re in non-Euclidean space, which is what we deal with in most neural network. So the gradients we calculate aren’t the true gradients.

where \(\nabla_{nat}\) stands natural gradient, \(\nabla\) is conventional gradient, and \(G\) is a matrix called the Riemannian metric.

When the space is Euclidean, \(G\) is an identity matrix, so

Using natural gradients, suggests that the gradient descent algorithm should be modified to

where \(\alpha\) is the learning rate

For neural networks, \(G\) is given by the Fisher Information Matrix.

Fisher information is the second derivative of KL divergence

Where \(D(\phi\|\beta)\) is the KL divergence between the output distributions of the same model parameterised by \(\phi\) and \(\beta\), where both belong to the same parameter space.

Both directions of KL divergence have the same second-order derivative at the point where the distributions match, so locally KL divergence is symmetric.

We assume \(\theta'-\theta\) is small, else the approximation won’t work.

This a Python class for Categorical probability distribution, used for discrete classes.

Now we initialize our placeholder for images and corresponding labels:

As you can see above, we’re using the cross entropy loss. probs has the probability distribution across all the numbers.

Time to calculate the natural gradients. First we need the conventional gradients:

For finding the Fisher Information Metric, we’ll need the KL of our output, let’s make use of CategoricalPd class above for this.

We can easily find the second order derivative of of kl using Tensorflow:

We can now calculate the natural gradients as mentioned above

We need to do some reshaping so the vectors’ sizes match.

We can now use a simple gradient descent optimizer to train our network:

You can now create a tf.Session can run the train op feeding values into X and Y. But there’s a problem.

Calculating the hessian is a expensive, since for \(n\) params, you’ll be calculating \(n\) gradients. If you check, fish is matrix of size (7840, 7840), and trying to find its inverse is computationally expensive, since matrix inverting is an \(O(n^3)\) algorithm, so for our matrix, the number of operations is around ~1012. This is for the simplest single layer neural network. Obviously the naive approach will not work for deep learning models without some other clever algorithm.

I ran into another problem where fish was a singular matrix, so I couldn’t calculate it’s inverse, so I figured I’d use the Moore-Penrose pseudo-inverse, or for the NumPy fanatics – np.linalg.pinv, but suprise suprise, Tensorflow does not have an implementation of pseudo-inverse. After going through the documentation for Tensorflow’s linalg module, I came across tf.svd, Tensorflow’s GPU implementation of Singular Value Decomposition, so I wrote my own version to pseudo-invert my matrix and then matmul with grad_cov to find grad_true

I finally could train the simple one layer network with a learning rate of 1e-3 and batch size of 32, here’s the convergence graph along with vanilla gradients thrown in to show that all the work is worth something. As you can see the natural gradient descent(orange) reaches the same loss as conventional gradient descent(blue) in much few iterations. 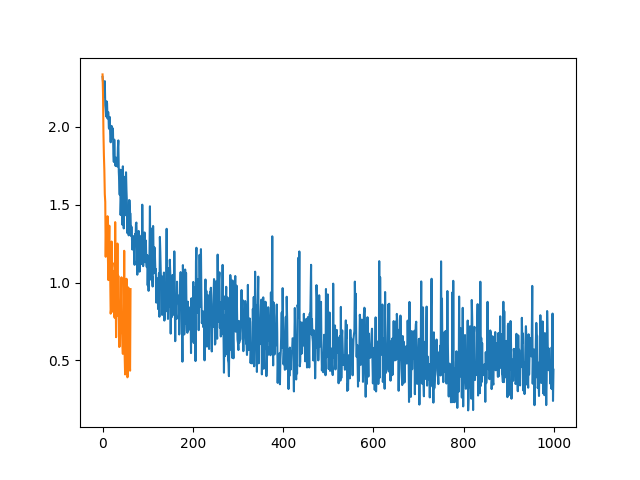 We can make the algorithm faster and more practical for larger networks by using conjugate gradient descent to invert the Fisher Information Matrix. This is what’s actually used for TRPO. I might cover conjugate gradients in another post.

All code and results can be found here.